BMW Fatal Flaw, the 1200GS Could Be the Deadliest Bike on the Back Roads

The flagship bike of the worlds flagship dealer in adventure motorcycling has a deadly blemish on their reputation and are trying to downplay the concerns. The BMW “Fatal Flaw” has been hospitalizing riders across the globe and if you own the bike you’ll want to address the issue.

Loaded down on your brand new adventure bike, heading off into the back woods, or back side of the world in search of adventure could be one of the greatest memories of your life. It could also be the last memory of you too. One of the most coveted motorcycles in the world, the BMW 1200GS and GS Adventure, have been brought to the spotlight for reasons other than the usual great adventure photos they are known for.

Claims are growing in what has been dubbed the “BMW Fatal Flaw”, developing from crash videos, pending law-suits, and horrific injuries. The situation has escalated to include its own website, born from lawsuit plaintiff Tony Georgiou, who was hospitalized after his BMW reportedly failed. Here you can read accounts, sign a petition to mandate a global recall and add your own story if you have one.

So, what exactly is the problem you ask

The BMW 1200GS motorcycles from 2013-2017 are said to have a stanchion failing issue. A statement from BWM was given as follows;

“BMW Motorrad has determined during ongoing field observations that the fixed fork tube of the specified models can suffer preliminary damage due to unusual incidents with momentary high stress without the user noticing the damage through changed drivability. Such high stress can be caused when driving over an obstacle, during a fall or when driving through deep potholes with unvarying speed.

BMW Motorrad has therefore decided to check the above-mentioned vehicles and repair them if required. The owners of the affected motorcycles will be informed by BMW Motorrad. The service campaign is free of charge for customers.”

What does that mean in plain English; basically if you use your GS like the adventure bike you thought it was designed for, and go through ruts, rough terrain or anything outside of a flat surface, you may run into problems. The stanchion has a pressed-in seal that can lose its integrity as the shocks flex up and down or movement is created from side to side. Overtime, as one side puts pressure on the other side the stanchion may begin to spread as the opposing side works its way inside to a place of least resistance.

Eventually the stanchion spreads, creating a weak point and comes loose, once that happens your fork will separate from its fitment and all steering and control will be lost. Picture twisting an oversized steel screw into the smaller plastic hole. Eventually the plastic hole will spread until it breaks.

Various claims have been emerging, and it seems a crash resulting from the collapse can be life-altering. Naveen, a BMW owner with a Fatal Flaw issue stated online “I hit a pothole at about 40 kmph and after about a couple of kilometers ahead when I locked brakes to avoid a hazard at about 60 kmph, the front wheel and the fork collapsed and the bike slammed into my right leg like a WWE wrestler. I have had three surgeries on my right leg because of this stanchion failure.”

The man who took action

In July of 2016, six-months after the purchase of his new GS. Tony Georgiou of South Africa was on a group ride with a BMW club in his area. It’s here, while being filmed, that he hit a rut in the road and that rut was believed to be the final point of stress causing his fork failure.

The fall left him hospitalized in ICU, with a punctured lung, ten broken ribs, and other various injuries. His bike was returned to BMW of South Africa for inspection, then shipped to BMW of Germany for a more thorough investigation in October of 2016. Some eight months later BWM responded saying that they were not responsible and the impact, and his riding style was more likely the cause.

Feeling like BMW was “brushing it under the carpet” Tony set up his website BMWFatalFlaw.com, in an effort to let other BMW riders know of the situation and in hopes of getting BMW to do something about the life-threating problem. Over time, it eventually worked.

From here other stories began to emerge and finally BMW asked for models in his area to be brought in to combat the problem. To save face BMW basically re-worded a the recall, and instead softened the blow by issuing a “Service Campaign”, that is likely to affect nearly 150,000 BMW GS models that were built from November 2013 to June 2017.

Mr. Georgiou had met with BMW executives in an effort to resolve the claim he made against them. No resolve was made and on December 20th, 2017, he issued a summons with the High Court Of South Africa against Danford BMW as the first defendant, and BMW South Africa as the second defendant.

With growing support, clear evidence, and a now international recall, cough cough “service campaign”, it would seem that Mr. Georgiou might actually reap some justice for his claim. 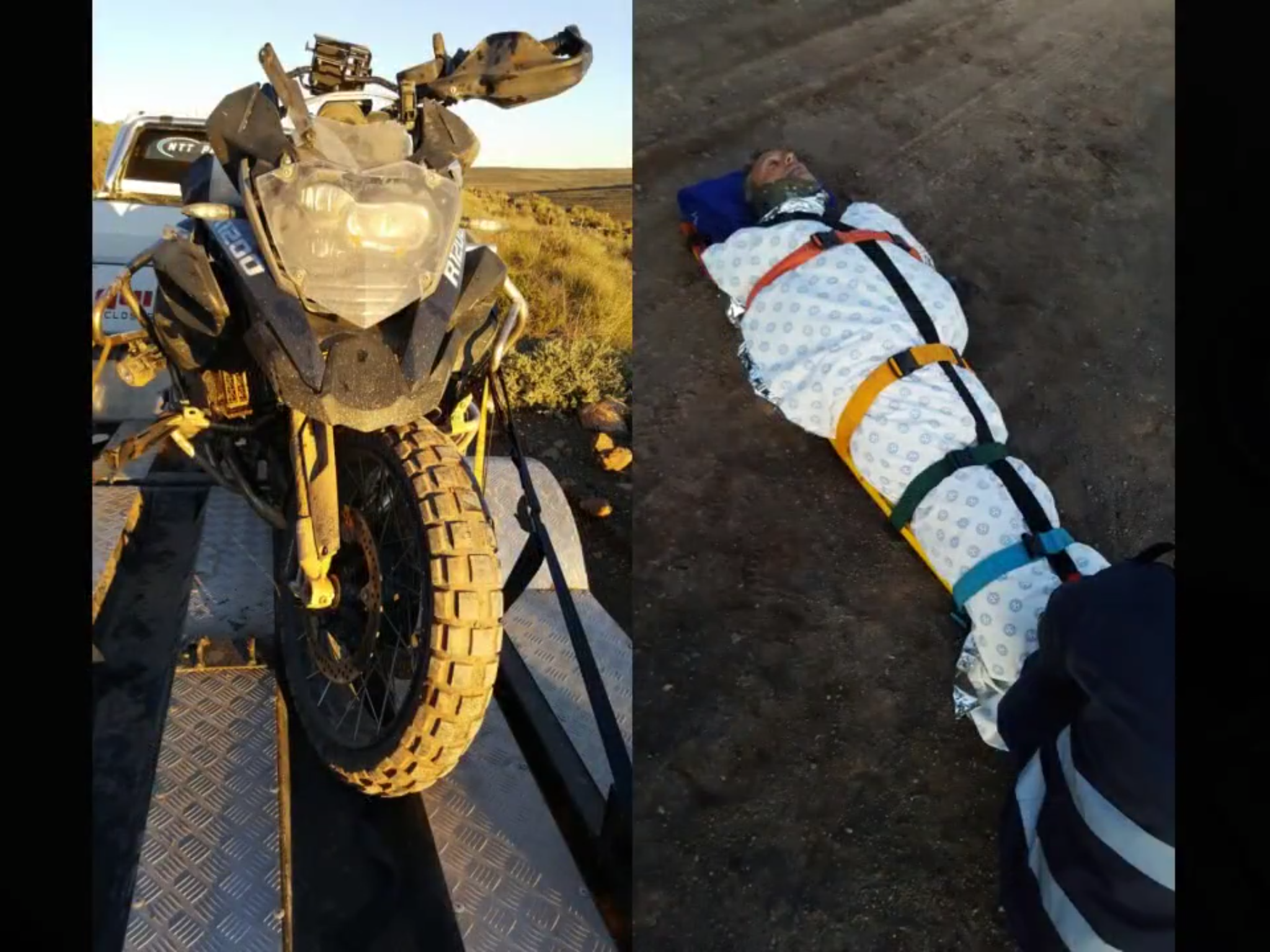 Can I asses my own problem?

Depending on how much you trust your own diagnosis verses a potential fatal injury if you get it wrong. You’ll first need to check and see if there is a gap between the seal plug (as noted by #2) and the fixed fork tube (noted as #3) in the photo, using a feeler gauge. Checking the entire circumference of the tube to get an accurate measurement. If there is a gap of 0.20mm then the fork tubes must be repaired. A gap greater then 0.20mm, and they must be replaced. If you are looking for the fixed fork tube inspection document you can view it here.

Thirteen pages that go over in detail what to address on the 1200GS and 1200GS Adventure models for those sold in the USA. As a further point of warning you may notice an oil leak or noise coming from the area, depending on how sensitive your hearing is to fork noise over engine sounds and wind. Or how often you inspect the area for potential leaks. It’s likely best to take it in to your dealer, though you’re welcome to make that decision on your own.

BMW has been rolling out a fix for the forks in various regions of the world. As supplies become available they are being shipped to dealers in the way of a stanchion clip that can be fitted by the dealership, a sort of steel band-aid. Naturally any kits received are going to be first applied to any machines sitting in showrooms in order to make them sellable, next inline will be those who have booked themselves for repair.

There is also an aftermarket kit that has recently found its way to market and is being plugged by round-the-world riders, 2ridetheworld.com. A well known couple that has been traveling the world by motorcycle for close to fifteen-years. A kit designed by company BT Cycles alongside “aerospace engineers” has what appears to be a much sturdier design and can be fitted at home with some brief instructions.

The kit is designed for anyone who is looking to prevent a failure problem and wants it done immediately. It is designed similar to BMW’s design to be collared around the forks already in place. Side by side you can see the BT Cycles appears to be more aggressive.

For $189.99 plus shipping to wherever you are in the world, you get the following:

This kit can supposedly be purchased through BT Cycles site here, via the 2ridetheworld.com site here, or directly from one of their partners 4theoutdoors.com here. That being said, I went to all three locations and the kit was not available via the websites. I sent them an email to see what the issue was, though there has been no reply by the time of publication. You may need to make some phone calls to see if you can get your hands on one.

Picture of the product via the 2ride the world site: https://www.2ridetheworld.com/images/ARTICLES/Bikes/R1200GSALC/stanch-clamp/stanch-clamp-images/stanch-clamp-pic-2.jpg

When riding an adventure motorcycle you’d like to think that the number one concern is how much fun / adventure you are going to be having on that particular ride. That is only possible because you have usually taken out most major safety concerns. You wear the gear, maintain the bike, make considerable decisions around tires, brakes, and after market parts like lighting and visibility options. What happens when there is the potential for a manufacture to let you down?

The wearing concerns that your motorcycle might not meet the requirements of your adventure and could lead to potentially catastrophic failures in short time due to manufacturing negligence. This shouldn’t be something you should need to have on your mind as you fall asleep at night. Its not to say the sport isn’t dangerous enough already, why risk adding more to the mix.

Do you feel the bike you ride is a going concern for what you put it through? Do you have a GS built from 2013-2017 and have had the issue addressed or have you even been notified?

We’d like to hear your thoughts on the issue and look forward to your weekend of safe adventure riding in whatever part of the world you get your motorcycle fix.

Hi! I'm Mike Gitkos, and I obtained The Motorcycle Nerd brand in 2022 because of my love of motorcycles, gaming, and tech/gadgets. I started riding in around 2010 with a Kawasaki Ninja 250 (who didn't) followed by a Honda Shadow Sabre 1100, and I'm looking to switch to an Adventure Bike next, preferably the Yamaha Tracer 9 GT.

My content here and on YouTube will revolve around the things I love in tech, gaming, and with motorcycles.

Death of another dinosaur, is it the end of the KLR?

The Best 9 Adventure Bikes for Riders of All Levels

6 most expensive bikes in the world for impulse buying millionaires

5 Best Roads to Ride in Pennsylvania

Up, down, and Around the World. Charley & Ewan will only have sideways left to go.

Does Having a Baby Mean Selling Your Bike?