Indians New FTR120 and A Look into Its Historical Inspiration

The all new Indian FTR1200 line is Polaris’ way of capitalizing on a vibrant history alongside an exciting future. So far it looks like it’s working. Here’s a look into what this new bike offers and an overview into its inspiration.

Indian motorcycles hold some of the deepest roots in the flat-track racing world, and now they’re hoping to bring that nostalgia into your garage. With the launch of Indians latest motorcycles the FTR 1200, and the FTR 1200S, Indian looks to be teasing your race-track dreams to riding reality.

Indians FTR was finally revealed on the world stage in Cologne, Germany October 1st, 2018. The night before the huge Intermot motorcycle show that sees around 250-thousand visitors walk through its doors. The FTR was first greeted in a private events center to an intimate crowd that welcomed the brand’s flagship champion rider Jared Mees, who graced the party with a smoky burnout. As the smoke settled and the smell of melted rubber faded, the bike was officially revealed. 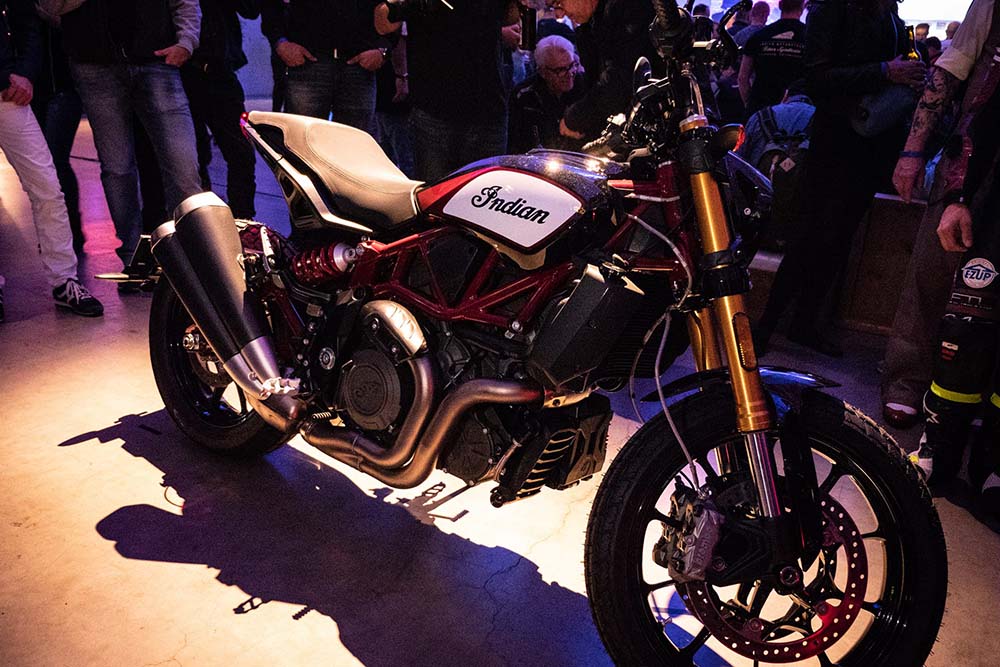 A past build on podiums, pitfalls, and resurrection

It almost sounds like the second coming of Christ when you get into the details of Indians history. A story that weaves its way in and out of the history books, dies, and then is brought back to life. Wait though, then the brand dies again, only to be again resurrected to re-live its racing history. Nothing tells a story quite like an Indian motorcycle. Indians first two-wheels hit the ground in 1897 as a bicycle that quickly gained momentum. Then, like any good American manufacture, they decided the bike might be better with an engine in it. So by 1900 Indian had installed its first single-cylinder, 175bhp engine.

Next, much like the bike, sales took off! From here it didn’t take long for some of Indians trademarks to become showcased. By 1903 the bike had set its first land speed record of 56mph, and it seemed there was no stopping an Indian. By the 1910’s Indians motorcycles were the biggest selling motorcycles in the world, and they were being built for speed & success. Their speed became evident as riders in the Isle Of Man TT race in 1911 took home 1st, 2nd, and 3rd on Indian motorcycles!

Oliver Godfrey, first winner of the Isle Of Man TT race in 1911

In the years following it seemed Indian was on an unstoppable climb to motorcycle sales success, and the sales of their Scout and Chief models were selling on a competitive basis with Harley’s bikes. Then by 1953, it seemed all the manufacturing nuts and bolts had fallen off. Faster than Indian appeared, it was gone. Down the road Royal Enfield tried to revive the brand under various Indian related titles; Tomahawk, Fire Arrow, and Apache, to name a few. With impending failure, Indians name was sold to AMC out of the UK, which they themselves went bust shortly after. The storyline would only repeat itself again and again. Every time the Indian name traded hands, it would eventually lead to bankruptcies by those that always seemed to be caught up in a tax scam or legal issue. Indian was looking like the go-to brand for deceit and future failure.

Finally, the trail of scandal came to its current end in 2011 when Polaris legally acquired the title and began manufacturing Indian branded motorcycle into what they are today. Like an elusive map to a treasure chest that was mishandled by a lifetime of ill-intentioned pirates. It looks like we might finally have a legitimate winner.

Introducing Indians latest release to the marketplace, the FTR1200 and FTR1200S. If sales are taking place based on sex-appeal, then it looks like we’re going to have a striking winner. Top selling motorcycles in the Scrambler, Café Racer and Flat-Track style are being built more for looks than any other feature right now. This eye-candy discovery was made by BMW recently when developing their new line of Spezial-ready bikes. With this FTR line up, Indian crafted an Instagram-friendly look that will have both sexes getting excited over its curvy finish.

The 1200 base model will hit showroom floors in just one outfit option, a paint job dubbed “Thunder Black.” This color might be mistaken for regular glossy black for those of you who don’t have a keen eye for Thunder. You can drive the 1200 model off the showroom floor for an MSRP of $12,999. The 1200S version will find its way to the showroom with two outfit choices. Either the formal eveningwear look in Titanium Metallic over Thunder Black Pearl or the after-party look of Indian Motorcycle Red over Steel Grey.

If you don’t like eveningwear or after-parties, no problem. The S-model will also offer a bonus option, and for a cool $1000 more you can get your hands on a flat-track look-a-like Race Replica paint job. The 1200S model without the paint upgrade can be had for $14,999. However, the race paint job won’t just increase the price; it’s likely to increase your horsepower too!

What sets the FTR1200S apart

One of the unique features on the S is the 4.3” display screen. While the base model comes with a round analog display that includes a USB charger, the S-model steps things up quite a bit.

The display is a touchscreen that allows the user to sync it with their phones Bluetooth, allowing for the operation of your phones entertainment. As well the display can be customized to your liking, and it too includes the USB charging port.

Inspiration by both man and machine

Throughout Indians history of ups and downs, there have certainly been some crowning achievements and monumental crashes. As Indian was headed for its first bust, their racing team were making history as the “Wrecking Crew.” In the 1950’s the trio of racers, Ernie Beckman, Bobby Hill, and Bill Tuman were terrorizing race tracks around America. Between 1950 and 1953 they had accumulated 14 AMA national wins.

Now the ambitious Indian brand with some new ambitious goals, is looking to relive those glory days. In 2016 Indian wanted to make a name for itself once again in the world of flat-track racing, and unveiled the Indian Scout 750. Along with an all knew Wrecking Crew that included Bryan Smith, Jared Mees, and Brad Baker. True to its repetitive history, Indian would again be back in the history books. The new Wrecking Crew won the 2017 and 2018 championship season, and in 2017 alone the boys tallied up 14 overall wins, 37 spots on the podium, and 6 all out podium sweeps! These spectacular wins put Indian back in the spotlight and had developers looking to design a bike that mirrored your flat-track dreams in a design that was street-legal.

You need to prove your worth to design an Indian motorcycle

If you think that Polaris has a computer program that spits out design ideas and the one with the most votes at a board meeting wins, you’d be dead wrong. To get the FTR750 Scout off of the idea whiteboard and on its way to reality, you need to prove you’re worth it. The Senior Industrial Designer at Polaris, a man named Rich Christoph, partnered up with racing legend Jared Mees. Together they came up with a sketch and design that would go head to head against a number of other design hopefuls within Polaris. Once they securely won that design process and eventually brought their Frankenstein to life, they then had an open door, to work on the design for the Scout FTR1200 Factory Custom. This design would be the stepping stones that would lead up to the inspiration for the FTR1200 design.

In the end, Indian would get its “Born on the dirt, made for the street” look that it had been hoping to achieve. Well, after some fine tuning and design alterations that is. The design team needed to re-think most aspects of what made up the Scout bike and stuff the best features into the FTR. The FTR needed a more streamlined engine that would have Indian designing an all-new crankcase that restacked the transmission shafts and allowed for the shorter 60” wheelbase. Some substantial design changes managed to bring the engine down to 185lbs, not an industry benchmark by any means, but light compared to the 40lbs heavier original Scout design.

The tire styling was made to be more street practical, as 17” front and rear tires that are used on the flat-track were not going to be beneficial for the daily commuter. Instead, Dunlop’s tire was designed to the user-friendly 19” front and 18” rear. Allowing customers not to be pigeon-holed into only buying a particular tire. Commissioned tire manufacturer Dunlop’s current design took a lot of re-tooling, but once they got the design right, the team had a tire that looked dirt-track and could still perform on the street.

The final cosmetic masterpiece is the fuel tank and air box placement. The fuel tanks deceptive, under-the-seat design allows for better weight distributed for this motorcycle. As well this design allows for a large airbox where the fuel tank would usually be, helping to achieve the desired power. The bike is sexy, smart, and stylish. I’ll bet it has a massive amount of right-swipes on its Tinder profile.

Sure, the Norton 500 had a special place in the history books as Che Guevara rumbled around South America on one in the Motorcycle Diaries. Then if you could pull off the look, a Harley Chopper inspired by Easy Rider might have been your 70’s ride of choice. At the least, there might be a movie poster up in your garage to give you the look. There is, however, nothing like seeing the underdog success of Burt Munro who dedicated his life to a 1920’s Indian in the shed behind his New Zealand home. Here he built, and re-built his project bike into the “World’s Fastest Indian.” Netting him a painfully achieved place in the history books with an official speed of 183.59mph, in the under 1000cc category. The fastest time ever recorded on an Indian! I don’t think the new Wrecking Crew will be hitting numbers like this, but they’re still taking home trophies.

It’s difficult not to get excited, concerned and emotionally nostalgic all at once over the FTR line. The fact that Indian has brought itself once again from demise to dominance is as remarkable as any captivating story in history. This time a team of dedicated designers and racers are re-living a dream in a motorcycling era that changed the face of the racing world, on a bike that has a look all its own. Will it last forever, I doubt it. Will it last for even a decade, it’s hard to say. They say what comes up must go down, and from purchase in 2011 by Polaris to date is an extremely short timeline to be back on top. I can only say that I hope their current success can be replicated for some years to come, and that this new style of Fastest Indians can hold it’s own on the street and the history books.

Hi! I'm Mike Gitkos, and I obtained The Motorcycle Nerd brand in 2022 because of my love of motorcycles, gaming, and tech/gadgets. I started riding in around 2010 with a Kawasaki Ninja 250 (who didn't) followed by a Honda Shadow Sabre 1100, and I'm looking to switch to an Adventure Bike next, preferably the Yamaha Tracer 9 GT.

My content here and on YouTube will revolve around the things I love in tech, gaming, and with motorcycles.

The Best 9 Adventure Bikes for Riders of All Levels

6 most expensive bikes in the world for impulse buying millionaires

5 Best Roads to Ride in Pennsylvania

Up, down, and Around the World. Charley & Ewan will only have sideways left to go.

Does Having a Baby Mean Selling Your Bike?