From Philly to Boston - Food & fun for two-wheeled adventures!

From Philly to Boston - Food & fun for two-wheeled adventures!

A motorcycle is basically a medium for random adventures that would just seem too silly to do in your car; just like french fries are basically a medium for ketchup. You would never just eat a packet of ketchup. Though it seems perfectly natural to suck back ten of those little packs with an order of greasy, delicious french fries! Would you excitedly hop in your Kia on a Sunday afternoon and head off to the local pub, only taking the back-routes and hoping to be greeted by a bunch of other mid-range car drivers asking about what your choice of shoe, jacket, and glove options were considered for this particular drive? Man, never, not in your life! Well, there are a few oddballs out there, I suppose this could happen, you never know.

That being said, you’d sure as heck jump on your cruiser to drive 500-miles on a weekend just to check out a burger and beer joint that had been recommended by a guy you met while talking biker outfits a few Sundays ago. Well my friends, let’s touch on those wonderful moments of consuming natural resources for no other purpose than a culinary excuse to fill the void of your motorcycle medium. Let’s talk about a weekend food-route from Philly to Boston!

What food is Philly famous for?

Unless you built your house under a rock, you should know that the beloved, high-carb, high-fat, and highly delicious Philly Cheesesteak is what puts Philadelphia on the food map. Like pizza, you could find all kinds of variations ranging from cardboard buns wrapped around a hot dog, to something that resembles a tiny slider. Let’s cut (pun intended) to the chase here, so you know what to tell your buddies on Thursday night. So, they can spend all day Friday at work thinking about it before hitting the road Saturday morning. “John’s Roast Pork”, with more positive reviews than a tax-refund, is a real meat treat. Loosen your leathers and order up a cheesesteak with sharp-cheddar and grilled onions and you’ll be rolling back to your bike in pure happiness. While you’re there, you will have the pleasure of watching them cook your scrumptious cut of meat right before your bewildered eyes, and in-turn, they can watch you drool all-over the counter. You’re probably going to want to arrive before or after normal eating times, as John's place is ranked #1 for a reason and is usually packed!

Make it your Saturday stop as they close on Sunday's to give pig farmers a chance to catch up and replenish their stocks. The place is simple and has just enough character so that you know it's been continually evolving since its doors opened back in 1930. It has such accolades as being featured on the food network, everything on the menu can be enjoyed for the wallet pleasing price of $10 and under, it boasts great street parking, and the staff is like a big bantering family. As well, if you are hoping to make up some time on your little adventure and don't want to spend too much time waiting for your amazing food, you can call ahead and place your order. For more details, location, and operating hours, check them out at JohnsRoastPork.com. You won't be disappointed! 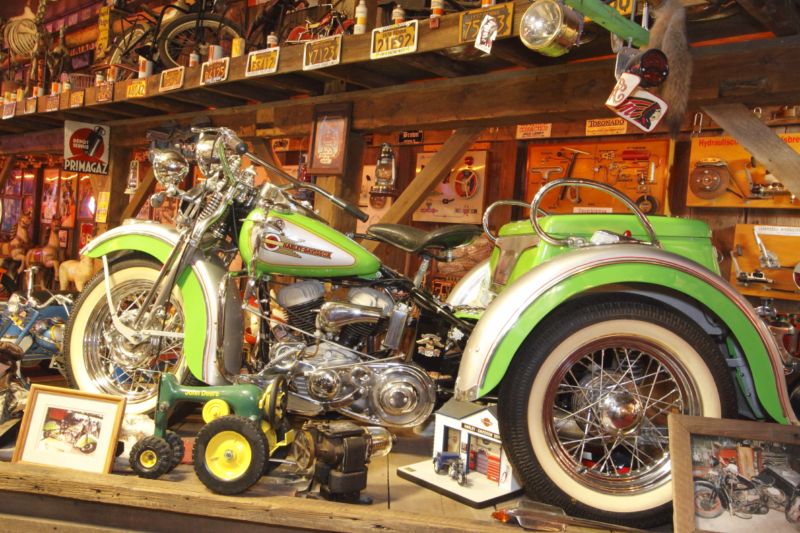 More than just a detour, it's more like a detour through history! You might need to stencil in a whole afternoon here as Bills Bike Barn holds the stories of more than 100 vintage motorcycles. Rare bikes like a 1913 Harley Silent Grey Fellow, to a 1939 German Kattenkrad. Bill Morris is the type of guy who could just as likely tell you the names of the guys on the production line of where your current bike was built, as he could about what years they made modifications to that same model.

The barn was brought to life in 1998, but Bill has been in the motorcycle business for close to fifty-years now. The looks of this place can be a bit deceiving, as you’ll soon see when you step foot inside what looks like a 50,000 sq. ft. shop. It’s here that you’ll see the shop is there just to protect the pre-1800’s barn that was dismantled piece by piece, then reconstructed to house this magnificent museum. Talk about creative ambiance. This piece of history also holds an increasingly large amount of antiques and a collection of Bill’s 'go to' collection items, including 1939 New York World’s Fair memorabilia. Bring your camera, clear your schedule, and take a deep breath. You might find yourself drawn to the world of motorcycle vestige.

After you fill-up on tender roast pork head out of the city on the I-467 North, eventually exiting on the I-80 West towards Bloomsburg, then let your GPS guide you to their doorsteps. Depending on how throttle happy you are, it should take about 2.5 to 3 hours. For some more photos that will have you intrigued enough to become a possible history buff, see what they’ve got at BillsBikeBarn.com.

New York is likely more Big-Apple than you want to bite off, that, and the traffic will probably require a lot more patience than you might be looking to need for just a short weekend adventure. Instead, lets lean the bike inland towards world famous West Milford, New Jersey. That’s laughably inaccurate, however, it officially made its way on the preverbal map when J & S Roadhouse took over, which was formerly known as the Mountain Rest Inn. This backcountry biker style bar has had many a two-wheeled rider pop their head in for a look. It is with this 'head pop' that they quickly became long-lasting family. With Jamie & Steve, the owners who are often seen shaking hands with the patrons, it’s more like garage-beers with your buddies than an intimidating biker club hangout. Parking your bike on the lawn is going to have you sharing space with somebody’s quad, dirt bike, Harley, or even the ranchers horse that lives up the road. You won’t find a scene like this in The Big Apple.

With weekend entertainment from groups like the Farmer Phil Band, or a rotating line up of other infamous acts, you'll get the feeling everybody knows everybody and you’ll soon feel like family. The food is non-pretentious, it's pub grub on the high-side of delicious! Where you might share a sample of garlic-honey-siracha-wings, or mango pulled pork with coleslaw. The delectable dishes served up perfectly with some ice-cold beers to share with your riding crew. Seriously, check the reviews, sounds like their doing their part to counteract global warming each time they set another frosty pint on the table. They might need to request a sixth-star from Facebook, as the five-star comments seem to be looking for a place to expand.

Ride your bike right up on the lawn, order up a pint, or swing by one night for a little pre-reconnaissance inspection on one of their taco nights or free hot dog Thursdays. You might have just found your out-of-town mistress for when you feel like cheating on your local pub.

A straight shot on the I-80 East, you’ll be heading back towards the coast. Then make a short zip up the county road 513 and keep an eye on your map for Gould road, then Wooley road shortly after. It’s about 2 hours from the Bike Barn.

BBQ With A View

This section is all about the view, well with a little BBQ too. To some, the refreshing scent of the ocean, along with a gentle sea-breeze is as alluring as a smoked brisket wafting over your neighbor's fence. The nutmeg-states coastal-drive will have you winding your way down through Hammonasset Beach State Park. A stunning place that has some notable stops and photo-worthy places to give your butt a rest. With countless ocean-side inlets and little cafes, you might be interested to take this beautiful meandering route to one of its more popular detours. Like the Henery Whitfield house, Nautilus Submarine Museum, or an afternoon adventure at the Mystic Aquarium. This biker-friendly road isn’t too busy, so you’re not going to find yourself avoiding trucker-draft or cellphone talking drivers rushing their way to the office.

There are countless camping and picnic opportunities, however a BBQ stop could be more up your culinary alley. Right along the coast is Chester’s BBQ, rated one of the 10-best places to bask in BBQ says Boston.com. Chester knows his stuff. With humble roots that grew from his original eight-seat restaurant where he’d spend the nights sleeping in the kitchen just to keep up with demand, they now have two busy locations dedicated to the trade. Using indirect heat from woods such as hickory and cherry, they let it smoke until the BBQ deliciousness falls off the bone.

Put your rubber to the road and head down the I-287 towards the coast, crossing the lusciously liquid Hudson River. Turn onto the I-95, and if you taste salt water, you’ve gone too far! Stick on the I-95, and depending on your desired stops, they can all be found just off of this road. With the Aquarium being near the end of this route, about three hours from J & S Roadhouse.

Let’s wrap up this road trip with an iconic finish! Setting your sights on the oldest operating restaurant in the U.S.A. The Union Oyster House first opened its doors in 1826 and has been shucking out a living ever since. The site is now a national historic landmark and caters to casual and notable guests throughout the ages. Some famous names such as J.F.K. used to take in some quiet time in the privacy of the upstairs dining area as you can see this dedicated booth still on display today. Naturally they have all things seafood and some excellent, locally harvested oysters. Or slide up to a New England classic, the clam chowder. With almost two-centuries of tried recipes, you are not likely to let down your riding crew.

Just stick the I-95 until you hit the T in the road, just past Norwood. Then shift gears heading up the I-93 along the Warf into the city. It’s about two-hours from your BBQ stop, and there are plenty of great options for a cold beverage along the Warf if you are looking for a refreshment. For more information, check out The Union Oyster House at, UnionOysterHouse.com.

If you are wanting to add a little more motorcycle and motor-orientated history to your day, the Larz Anderson auto museum has a jaw-dropping line up of all things amazingly automotive with a selection of impressive motorcycles from days gone by. They host a number of regular events and if you look at their website, you might be able to plan a day around one of their dedicated motorcycle days. Its only about thirty-minutes from Boston and worthy of a curious look. Check them out at LarzAnderson.org.

On a continual search for the next best riding excuse, food is usually a pretty easy sell to every range of rider. Mix in a touch of educational history, a place to capture some photographic moments, and enough miles to get your weekend fix and that my friends, is the perfect recipe to keep your bike smiling from mirror to mirror, and the rider too!